In a calendar devoted to his lesser-seen artwork, Shirow describes Neuro Heat as a “3D-CG” TV series and comic that was his take on The Bionic Woman (or “Bionic Jamie” as Shirow knew it). He also paints it as a version of his own Ghost in the Shell aimed primarily at viewers outside of Japan. The show went no further than Shirow’s designs. And the comic? Well, Shirow’s far too busy drawing slimy-skinned mermaids being railed by squid-men and I-don’t-know-what else. 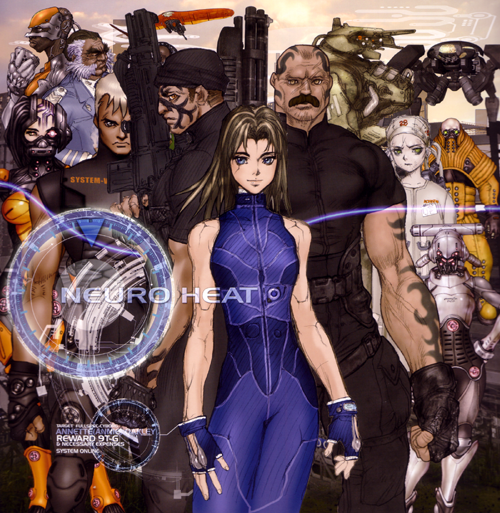 Neuro Heat’s art shows a team of Shirow-grade cyborg agents and mecha clustered behind the apparent heroine, Annette “Annie” Oakley (likely as much of a reference-laden pseudonym as “Motoko Kusanagi”). Shirow didn’t lie about the lack of originality: this is just Ghost in the Shell with a cheerful blonde Motoko and a mustache-sporting Batou. There’s even a redesigned Tachikoma in the background.

On the other hand, the idea of a Americanized Ghost in the Shell has merit, particularly if Annie were a hunted renegade, as implied by the “reward” caption next to her. Perhaps the show could examine just how an American democracy would use cybernetic technology, revealing social and political subtexts in the ways it differed (or didn’t) from the Japan-based Ghost in the Shell. Or maybe Annie would just wear a cowboy hat and eat a big sloppy cheeseburger while watching football on her giant-screen TV.

Plans for Neuro Heat dried up around 2001, though it almost seems a better idea today. Ghost in the Shell is still popular in North America, to the point where Dreamworks recently optioned a live-action version of it. Meanwhile, modern anime studios, besieged by creepy fans in Japan, are finding more high-profile work in mainstream Western properties like Halo and Batman. With all of this going on, it’s surprising that no one’s dusted off Neuro Heat.
Kid Fenris on 8/26/2010 1 comment:

Satoshi Kon, one of the best directors in the anime field, died yesterday. I really wish this were a prank, but it's not.

Kon visited New York for a film festival back in 2008, and I was in the audience during a Q&A session. I'd been let go from Anime Insider the month before. I was already a little jaded toward the industry from writing about it for three years, but getting laid off made me truly sick of anime and everything it touched.

I came away better. Paprika was shown, clips of Kon's other films and projects were played (including this NHK piece), and he gave all sorts of interesting answers. He was a fascinating, clever man who kept taking pictures of the audience. It reminded me that as stupid and wasteful as anime is, it still has exceptionally gifted people making things worth seeing. And we won't see as many of those things now.
Kid Fenris on 8/24/2010 No comments:
‹
›
Home
View web version